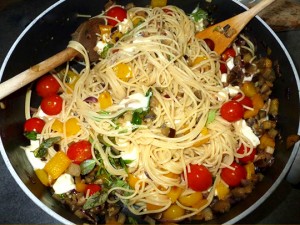 Description of Spaghetti
Spaghetti is a type of long noodle made from either rice flour or hard wheat flour. Do not know how to cook Spaghetti? It will take only 10 minutes! Just boil the water in the pot, break all of the pasta in half and set them in the water. After 10 minutes they will be ready.
There are many doubts where is spaghetti originated. Some say it originally came from Italy, some say from China or even Ancient Greece, but the first tomatoes combining with spaghetti noodles was in Italy.

A short History of Spaghetti
Some legends say that most probably spaghetti to Europe was brought by Marco Polo from the Far East in the late 13th century. But the tomato became popular only in the 18th century! Right after that dishes with tomatoes become very popular. And, when Thomas Jefferson brought pasta-making machine to the USA, Antoine Zerega started to make dried pasta. The Spaghetti Pasta and tomatoes most probably met somewhere in Italy after a long journey around the world.

More about Spaghetti pasta
There are plenty recipes of Spaghetti pasta salad, but most popular, of course, with meatballs. It is important to mention that the famous meatballs are fairly new American tradition. That is how pasta become the big part of the regular basis.