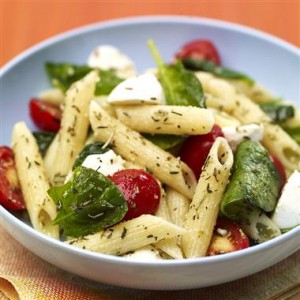 Description of Penne pasta
Penne pasta is probably well-known pasta – it has a tube shape. The tubes are usually quite short – about 5-7 cm.

It is originated from Campania, a region in Southern Italy.

Dishes with Penne pasta are very popular in the USA, where Italian food became part of the tradition. Penne pasta comes in smooth and ridged varieties, and can be used in a wide assortment of dishes (from casseroles to soups) and in few traditional Italian dishes (Mostaccioli). Penne pasta pairs well a variety of sauces – from thin to thick and chunky ones. It can be mixed with sauces or baked in casseroles, used in salads, added into soups.

How to make Penne pasta
Penne pasta can be made from a wide variety of wheats like other pastas. Flavoured varieties with added ingredients (such as dried tomatoes and spinach) are available too. The best Penne is made with durum wheat to create a shape and hardness of pasta and not to fall apart while cooking.

Probably the best thing about dried pasta is that it is essentially indestructible as long as it is stored in a cool, dry place. There is no reason to talk much about Penne pasta because you just need to try it!